A visit to the Houses of Parliament 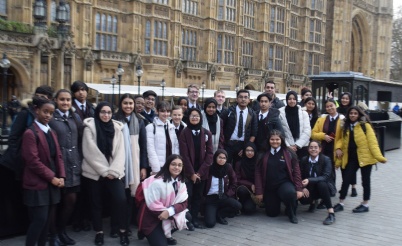 An Enrichment visit to Parliament occurred on 13th December 2019. Students from Year 9 and 10 visited the House of Commons and the House of Lords with a guided tour. Following that, they had a workshop at Parliament on Voting and Representation - the day after the General Election!

On Friday the 13th of December 2019, me and 28 other children from various years were picked to attend the parliament trip. This was an informative and interesting trip where we learnt about how the government works and the ways rules are made in our country. When we first arrived at parliament we went through a security check to make sure everyone was safe and properly equipped for the trip. We then had a tour of the building with our tour guide. She led us to the parliament hall where we took photos and learnt about the happenings of the hall. We then headed to the house of commons where we learnt about who sites where in the seats and how each 412 seats represent a different meaning in teams of where its positioned. We got to see the overview area where visitors can come and watch discussions that go on in the house of commons. As a symbol of respect, we were not allowed to sit as the seats where earned by those that sit there.

We then were led into hallway were the different paintings of all historical events and statues of historian were placed. Our tour guide explained the reason behind the painting and statues as we learnt when parliament was bombed it had to be rebuilt. It took just around 30 years to rebuild it. Whilst doing so they added key historical events into parliament too. We had a talk of the house of lords and how anyone could become a lord. The law used to be that only if the king knighted you as a lord you or your children could be lord. However only the boys in the family could be a lord meaning ladies could never become one. However, after the second war they changed the law. Now anyone could become a lord if they chose to regardless of gender or job you currently have.

After that we then were escorted into a room where we would do an activity. This activity put all of us into 6 or smaller groups where we had to talk about the changes we would make if our party came into power this meant that whilst learning about how the different parties have to come up with their ideas we also learnt about the money income and outcome of our country and how to manage it.

Soon after the tour and activities were over we got a warm goodbye from the tour guides and we headed home. Over all from this trip we learnt many things about our Country that helps us stay aware about what is happening were we live.