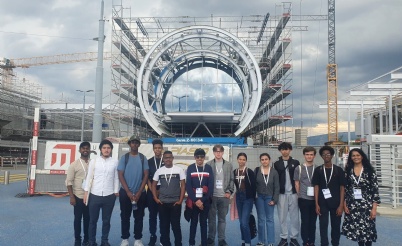 CERN is the site of the Large Hadron Collider (LHC), the world's largest and highest-energy particle collider. The main site at Meyrin, Geneva, hosts a large computing facility, which is primarily used to store and analyse data from. Our students visited the facility on Monday 4th July. Below is a recount of the day written by one of our students.

The day of the main event and the best attraction of Geneva. On Monday the 4th of July we visited the CERN facility, and coincidentally the 10th anniversary of the discovery of the Higgs boson. We were initially shown an introductory video, exclusive to the tour, and discussed with the presenter about some of the research taking place. The Physicist which conducted the first part of our tour provided interesting information about dark energy and matter. After, we got a presentation on data and how CERN handles the data from their experiments. There were displays containing all the different technologies used to store data all the way back from 1950s. And the cherry on top, was one of the first computers used to create the World Wide Web. Shortly after concluding his ted talk, the presentation screen went transparent and revealed CERN’s data base.

Our group then met with an experimental Physicist from Palestine, who was quite a comedian. Before entering the next building, he asked Ms Ponnuraj if she was pregnant. And after all the laughter stopped, he gradually revealed that in that very building was an antiproton decelerator

used for antimatter experiments. The name, ELENA. While on the tour, the guide began to explain the details of how it works and even revealed that ELENA will be used to create antimatter which then will be used in experiments to test gravities effect on antimatter. Despite being able to see so little, it was clear that this was physics. Where the subject came to life. Where secrets of the universe were being uncovered. And where what you learn in school becomes useful.

But wait, there is more.

During an intermission, where we had time to kill before our next activity, we went to the CERN globe. Which, in addition to the data centre, was the only place in Geneva with air conditioning. Inside there were many displays showing information about the LHC and current theories of the world. One of these was a display showing cosmic rays passing through it. Unexpectedly, there was a presentation on the origin of the universe. Within the already dimly lit globe, all the lights shut off. Walls and ceiling were now illuminated by a projection of space showing all the stars, all while a narration explaining CERN’s goal was playing.

The best was saved for last on this day, as the final activity was praised and is remembered as the best among our group. A practical session at CERNs S’Cool LAB provided the opportunity for a very engaging time building a particle cloud chamber. Using only dry ice and isopropyl alcohol, along with a casing, we were able to see the physics that we were being taught. As particles formed, collided, and interacted many were glued to the side of their chambers watching this in real time. When we discussed some of the trails formed by the particles, many of us were able to explain the phenomenon observed in these cloud chambers and even impressed the professor.

We also crossed the border of France because it was a short walk away.