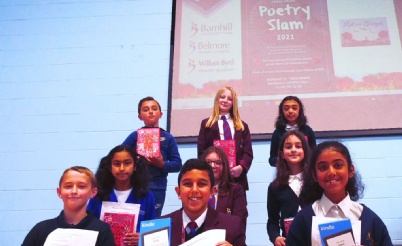 On Monday 15th November 2021, we had the delightful opportunity to organise and host the MLP’s first ever Poetry Slam at Barnhill Community High School.

Schools from across the Trust took part in a Poetry Competition inspired by the theme of Remembrance, judged by our local MP, Mr McDonnell, MLP’s chair of governors, Mrs Smith and our Head Students. 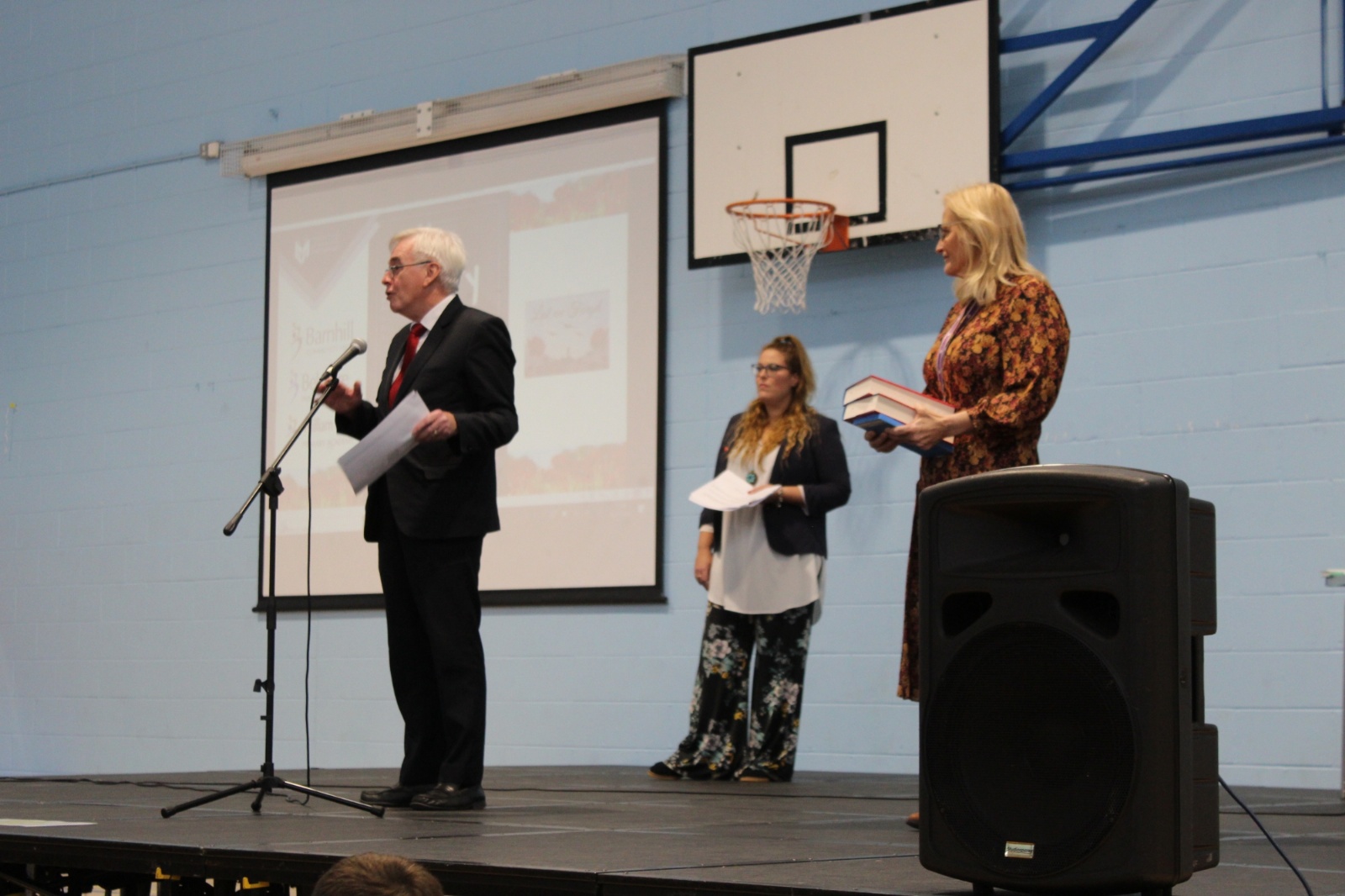 It was a truly memorable moment for our Trust’s pupils to showcase their creativity, talent and collaboration in memoriam of the fallen heroes and stand proudly in front of a large audience who applauded each and every young poet with such energy and delight.

Year 5, 6 and 7 winners of the in-class competitions which were held across Barnhill, Belmore and William Byrd came together for the first time and competed for their poetic finals.

Our young, talented poets did us so proud to see them perform their Remembrance-inspired poems on stage in front of a large audience of students and teachers.

Many congratulations to the winners of this competition and each school team who worked hard with dedication to prepare the pupils for this rewarding event. It was a fantastic event: Literacy and Oracy at its very best with personal development and universal values exemplified in the most creative way and with such honesty and pride from the students of the MLP Trust.

Poetry is truly powerful. With Poetry, we express emotions and ideas with intensity and convey strong messages. Inspired by Remembrance Day, our classmates from across the MLP Trust shared their great poems with us on Monday 15th November 2021 at Barnhill Community High.

'From Garden to Warzone' by Babylon

This amazing poem portrayed the negative aspect of war and the juxtaposition between peace and war. It presented how war can turn the most delightful places to a miserable and torturing relic of death. It appeared to be from the perspective of a soldier observing a conflict zone, questioning why the war started and why a once exquisite garden had to turn into ruins - why did it all happen?

'The Great War' by Ryan

This informative poem which portrayed the sacrifices soldiers made during World War I and how women were affected too. There was also a strong message about poppies and how they helped us remember the hardships and pain of the soldiers that risked their lives for us - '57,000 British lives were lost in one day'.

This poem reminded us of how important Remembrance Day truly is, specifically the two minutes silence at 11am. It showed how we should respect those who died for us. There was a huge emphasis behind having a two-minute silence for the dead and the death caused by World War I.

'Once there was a time' by Mayssa

This brilliant poem was presented almost like the story of a fifteen-year-old, experiencing the hardship and pain of World War I - how everyone wished and wished, terrified, for the war to end. It narrated of how creatures and plants died and how everything was just a burst of pain.

This was quite a short but meaningful poem. It was about the importance of poppies and what they symbolise. The poppies also resemble how 'peace on earth should grow, grow, grow'. This was a very meaningful reference and, once again, it presented the importance of poppies and why they are worn on Remembrance Day. Also, personification was used very well, as a poppy asked questions about itself and responds with a great answer.

In conclusion, it was great listening to all poems being performed by our classmates. I had great time writing my first newsletter about this truly brilliant event we hosted at Barnhill.